Who can save State Center?

Baltimore City, particularly West Baltimore, has waited long enough to see progress on development projects like State Center. State Center will transform neighborhoods, create jobs, promote new business growth, spur transit oriented development, offer safe and affordable housing for
residents, and add to the City’s tax base.
Be among the voices the City and State need to hear!
Join community leaders as they gather to urge the Governor
to Build a Better Baltimore and redevelop State Center. (Flyer inviting to a rally in front of City Hall)

A developer organized rally in front of City Hall took place on a gorgeous spring afternoon and attracted a small crowd holding sign "build a better Baltimore- build State Center".  A similar rally shortly before Governor Hogan cancelled the Red Line had little effect, and it is likely that this one will hardly be more effective. The parallel to the Red Line wasn't lost on anybody and invoked by every speaker.

What could possibly make the Governor reconsider and sit down at a table to negotiate specific objections? Just like when the Red Line was cancelled, communication, coordination, an analysis or a plan B are entirely absent. Instead there are strong words ("greedy politically connected crony capitalist developers" says Red Maryland, a variation of words the Governor himself has used) as if insulting a strong development team that includes out of state partners is a signal of Maryland being "open for business". Nor do these statements show any respect for a long broad based process with significant community participation and a complex use plan that addresses much more than the future of the State offices.


"We are tired of being robbed. Delegate Robbyn Lewis"

And then there is the silly exploration by the Maryland Stadium Authority whether State Center could be a great spot to put an new arena. That study hasn't even begun yet and is not listed on the MSA website. The arena idea is testament to the fact that the Governor and his people haven't spent any serious thought on the State Center Plan or on how to make it better. In fact, Hogan (and to be honest, also Nancy Kopp and Comptroller Peter Franchot who as the Board of Public Works jointly cut the project off ) entirely misunderstand what the plan was all about, a plan that was the result of ten years of consensus building and collaboration for comprehensive urban repair to the damage the original State office complex did to the City fabric and the surrounding communities.


"Why can it be right in Southeast Baltimore but not in Northwest Baltimore?" Delegate Nick Mosby

The State Center Plan was never about finding the cheapest deal for the State to rent office space. Instead, the project was about leveraging two local State assets (State-employees working on State-owned land and two rail transit lines coming together here) for economic development and a better city. Everybody understood from the onset that the State's lease- back rates would amount to an investment in Baltimore. Except the Governor who keeps professing how much he likes Baltimore and then takes billion dollar investments off the table.


"Invest in Baltimore communities. The Governor should return to the negotiating table. This is a model for economic inclusion. We don't need another plan, we need to begin building now." Senator Barbara Robinson.

This is like MDOT Secretary Rahn who keeps using the argument that he "is in the business of transportation" to object to real estate deals and transit oriented development (TOD). But for transportation itself he has no long-term or even mid-range plans, no vision, especially not for transit beyond the imminent short-term bus overhaul.

I know there are folks who think transit agencies should not be in real estate and should focus on their core competency on running and expanding transit. Conversely there are folks who really think that better land use is key to transit's success. Each position has some merit, But to resist better land use and system expansion makes absolutely no sense. Whoever complains that the existing lines operate inefficiently should definitely be interested in making best use of what's already on the ground. What better way than to put more stuff where the stations already are, i.e. TOD?
Whoever doesn't want to deal with real estate, what better way than to expand transit until disparate pieces turn into a real system around which people scramble to be? Taking one or both of these two paths is globally how every successful metro region operates.


"this is the heart of Maryland. Maryland only succeeds when Baltimore succeeds. the Governor pulled the plug on the Red line, he pulled plug on State Center, we can pull the plug on him". Senator Rich Madaleno, Montgomery County, wants to run for governor.

Alas, Secretary Rahn doesn't want to expand the system and he doesn't want to increase the land use at existing stations either. He only wants to build roads, especially in rural hinterlands, certainly not an expression of love to Baltimore and not a prudent transportation expenditure either. Of course, Rahn also objects to any metrics that would attempt to measure where dollars may be spent most effectively.


When we build places they shape how we get around. Brian O'Malley, CMTA

If reasoning and rationales don't go anywhere, political pressure is what is left. It was impressive to see Delegates, Senators and council people unite behind a project that had obtained so much consensus and praise for its design, its concept and its ability to create a win-win for the State and surrounding communities. Around America cities thrive because private-public partnerships rally around complicated and complex deals such as the Denver Union Station TOD. It is a case where State, City, the region and the core city stuck it out for the long haul. Now, after some dozen years in the making, all are reaping the benefits and the formerly desolate Denver station area is thriving.

In Baltimore, after a dozen years of transit and TOD planning, we stand still with our hands empty thanks to a Governor who loves Baltimore to death.

SUN report about the rally

Related articles on this blog:

My book, Baltimore: Reinventing an Industrial Legacy City is my take on the post industrial American city and Baltimore after the unrest.
The book is now for sale and can currently be ordered online directly from the publisher with free shipping. 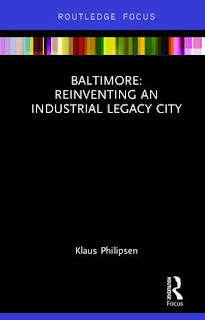