It is telling that the announcement of the amended Memorandum of Understanding (MOU) between the City and Sagamore that included upgraded community benefits was not held at City Hall. Instead, the Mayor and Council President schlepped out to Port Covington and Kevin Plank's new home turf at City Garage. It was as if the City were the one asking for something and not Sagamore. But such are the power conditions in Baltimore.

Early on Sagamore had engaged directly with the surrounding communities which they dubbed the SB6 communities for a MOU with them. The City stood on the sidelines and just waved everything through from BDC to the Planning Commission to the City Council.

Only there and at Councilman Stokes' Land Use Committee which had to hear three bills before they could advance to the full Council, did the fast moving project to a full stop. Stokes, an outspoken critic of the Harbor East TIF scheduled a number of hearings that slowed things down and gave the public a voice.

But things turned out differently, than even Stokes had imagined. The huge War Memorial Hall was barely large enough to hold all the interest groups and interested citizens. The hearings bore little resemblance to the usual hearings of the City Council and unfolded their own dynamic in which the Council largely became a bystander, or a facilitator of spirited negotiations between Sagamore, a coalition of churches and various unions.

How much the Council was overwhelmed showed last night at the hearing that followed hours after the new MOU had been announced at City Garage. Council President Young and committee chair Stokes did not really control the process; that fell to the new "unholy alliance" of BUILD church leaders and Sagamore which framed the event.

By showing up side by side with Sagamore ("A new day in Baltimore") BUILD itself became the target of noisy shouts and disruptions (Reverend Glenna Huber was even called a scab) which added some confusion but did little to change the course. After some testimony and in a last ditch effort to seize control, Councilman Stokes abruptly brought the meeting to a halt and declared a recess before the third bill had been brought to a vote, the critical bond financing bill.

Confusing everyone including his own colleagues, Stokes said there was not enough time between the publication of the new MOU and the vote. Earlier in the proceedings Stokes was clearly frustrated and said so as chair through variously contrite and aggressive comments that piled on the City as the "worst player" and lauded Plank as one that has "shown that he contributes to Baltimore". He then opened the MOU up for his own wishes not with a specific amendment proposal but expressing generally that the risk of possible school funding losses should be carried solely by the developer and some vague statement about profit-sharing, an item that is apparently still separately negotiated with the Baltimore Development Corporation. Councilwoman Clarke piled on with a request that all construction of the entire development (not just infrastructure) should be "prevailing wage", a request that could add hundreds of millions of dollars to the cost of the 5 billion private investments which typically don't have to abide by Davis Bacon wage rules. None of the amendments ever came to a vote in the chaotic proceedings that had no resemblance to Roberts Rules of Order.

What matters in the end are the outcomes, even if the process may have been messy. Most agree that the MOU has become much more favorable to the City and communities no matter that it wasn't the Mayor, BDC or the official agencies that are responsible for this improvement, and that council members Young, Costello and Stokes were mere facilitators.

More than any other organization, it appears that it was the coalition of churches known for 30 years as BUILD that did it. That was entirely unpredictable. They came to the party late, after Sagamore had already met for months with the six surrounding communities called SB6 and had signed a MOU with them.

BUILD did not come to any back rooms but showed up in force at Stokes' public hearings. They held fiery speeches, shouted and generally made a lot of noise. But that was not all: In a really smart move they had armed themselves with their own TIF expert consultant whom they had paid out of their own pocket, an expert in reviewing TIF applications. The expert had a bunch of items to criticize. An independent review that should have been conducted by BDC which relied entirely on the consultant Municap which in turn relied entirely on numbers provided by Sagamore.

BUILD and other groups who objected to the initial MOU achieved through a good old power play and tough negotiating that Sagamore agreed to double the amount of affordable housing. Sagamore also agreed to commit to 30% local hiring up from a 20% "goal".  BUILD declared this "a new day in Baltimore". "this deal is a far from where we started". The BUILD spokesman even took over the Sagamore slogan, "we will build Port Covington together" and changed it to "we build one Baltimore together."

At yesterday's hearing some were still not satisfied. In the once again overflowing War Memorial Hall they called Reverend Genna Huber of BUILD a scab when she praised the outcome as a result one can live with even if it isn't " a panacea". It must have been quite an experience for the reverend who, only a few weeks ago, had roiled the same room with a hearing contribution that was so fiery that its end became drowned out by frenetic applause.

Union spokesperson Williams began analyzing the process by blaming the council and not Sagamore for what he sees as a public-private partnerships that is carried out on the backs of working people.

As instructive and telling as all this is about the current conditions in Baltimore and as trailblazing the new MOU may be in terms of equity and social justice, one has to wonder how realistic Plank's big plans and commitments really are. how the economics of all this will work.

I would have preferred a deal where the City would participate in sound profit sharing in a system where the benefits go up and down depending on how well the project fares. (Like the Casino deal).

There is much that can and will happen in the next few decades. Large Baltimore players disappeared over the last 30 years:  Doug Becker and his Sylvan Learning (Remember, he was the local wunderkind before Kevin Plank), Struever Brothers, Pat Turner and his big Westport dreams, Ed Hale and his Canton Crossing dreams, various owners of the Sparrows Point Steel mill, Alex Brown, General Motors and many others should give us sobering pause, even if their works were usually carried on by successors.

For example, the doubled affordable housing component of which 60% need to be realized within the Port Covington development area itself and 40% can be built elsewhere in the city: Everyone knows that affordable housing needs steep subsidies to be developed, especially in weak markets. Where would the subsidies come from? Experienced affordable housing developers routinely cobble projects together from a dozen funding sources including the super competitive affordable housing tax credits for which even savvy developers often have to apply year after year before they succeed. Sagamore has no experience in the field. To construct 2,800 affordable units is a daunting task, even if it occurs over 20 years or so.

The "prevailing wage" requirement is a laudable thing as well, but as developers who use public funds, which can stipulate those wages know, "Davis Bacon" adds significant cost to a project. The Red Line cost estimate, for example, was in part so high, because of the many wage and procurement rules governing the project.

In short, everything that is in the MOU costs additional money on a project that even the BUILD consultant had considered only marginally profitable to begin with. It is highly likely that Under Armour can build its own headquarters at Port Covington, no problem. A signature investment like this headquarters can spur development, that was visible with Tide Point in Locust Point, UA's current headquarters, even before UA moved in there. But is there really demand for 14,000 housing units on top of the thousands that are currently under construction and an entire new town?

For this heavy lift to work mayor and City Council need to up their game. It will no longer be sufficient to just watch what happens. For Baltimore to finally break its bonds, it needs social justice and equity, but it also needs leadership at City Hall that sets the many disjointed initiatives up in a way that they finally add up and become synergistic. Everyone celebrating the historic Sagamore new deal and its community benefits needs to realize that the lift just got heavier.

A correction was made regarding the proposed amendment to subject all construction to "prevailing wage" rules. That motion came from Councilwoman Mary Pat Clarke, not a member of the Land Use Committee. Not from Councilwoman Ricki Specter as initially reported due to poor acoustics and visibility in the hall. The article has been augmented about profit sharing as an item apparently still negotiated between BDC and Sagamore. Nothing about that appears to be public.

From the new MOU Summary of terms released yesterday: 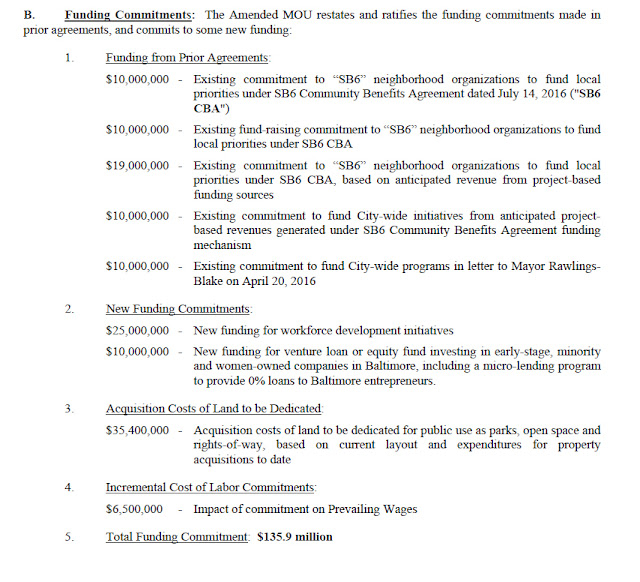 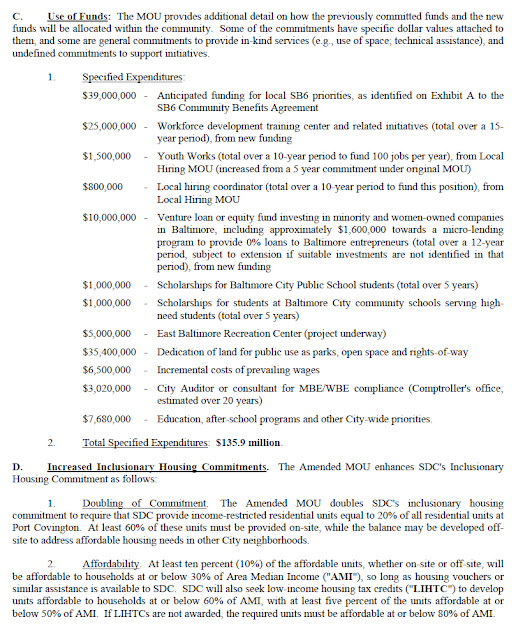 Posted by Klaus Philipsen at 6:39 AM