Baltimore urban networks: Failing to live up to their potential

"Connective tissue" is one of the things that Baltimore needs more than anything. Anything that can bridge across the black butterfly and the white L, across the rich and the poor Baltimore, bridge between bikers and hikers and those who simply want to walk their dog or stroll with their children, between old and young and various ethnicities. A system connecting urban parks should be an obvious winner. This article is about the value of urban networks and how Baltimore has not yet tapped the full potential of those networks.

Fifteen years ago bike advocates associated with the first Mayor's Bicycle Advisory Committee (MBAC), created Tour dem Parks, an annual bike ride between all major Baltimore City Parks. The goal: Promote the Baltimore Park system, get people to come together for a healthy activity and unite the many disparate communities of Baltimore, even if only for a day. At the time there wasn't even a bike masterplan. To create a narrative of bicycling as an egalitarian activity with a low entry threshold, MBAC had regular informal bicycles rides into various neighborhoods with then Mayor Sheila Dixon.  Those rides have since developed into the monthly Baltimore Bike Party.

Now activist Liz Cornish of Bikemore, APA and others want to make the annual park-ride experience permanent and eliminate the many dire stretches of dangerous on-street biking or hiking that separate the parks and that Tour dem Parks mitigated with cones and crossing guards. The completion of a connected system is estimated to cost $25 million according to the Rails to Trails Conservancy which is working on the 35 mile loop system. The system isn't a new idea, in fact, it goes back to the famous Olmsted brothers who had their hand in the design of several Baltimore parks and always envisioned connecting greenways. Already bike advocates find themselves at odds with landscape preservationists and community advocates. The ones fearing to compromise green space with a paved trail, the others fearing gentrification and that the wrong folks would benefit from such an investment. And then there a few who see bicycling as an intrusion of wealthy white folks, even though every bike party proves that to be a total misconception. 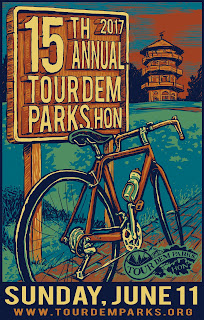 Those concerns are ironic and telling. Baltimore has a hard time to develop a good story. usually the Baltimore narrative is foisted upon the City from the outside, sometimes good (like in the recent NYT travel guide) and sometimes not so good (Homicide, The Wire). In face of some of Baltimore's dark realities, some may say that telling a good story is not only trivial but almost a sacrilege. True, but nevertheless, if Baltimore can't develop a compelling narrative what it wants and could be, it will be that much harder to gather the resources that are needed to flourish.

Jill Jonnes, an arboreal activist and author of a book on city trees "Urban Forest: A Natural History of Trees and People in the American Cityscape," is dreaming of a flowering trail with a a variety of trees blooming year round, each kind in a different season. Washington's Cherry Blossom festival combined with New York's Highline Park as a year-round attraction.

These are all nice ideas but Baltimore has a bad track record when it comes to "connective tissue".

One of Baltimore's strongest attractions should be its 5 mile plus Waterfront Promenade, Baltimore's oldest trail network. It, too connects a variety of communities but in spite (or maybe, because?) of the many years in the making, it lacks recognition and branding. Type waterfront promenade into Google and find that this great asset doesn't even have its own website, that it is hard to find a map for it and that it isn't even featured on the website of the Waterfront Partnership. And once one has found the promenade and is on it, it is easy to loose its course. Their is no uniform design standard, no easy to see signage and there isn't even a catchy name for it. Few will notice that the promenade actually extends beyond the Aquarium or the Rusty Scupper. There are still gaps in it and some of the twists and turns in the Fells Point and Canton area leave even locals puzzled about where it really runs.

Closely related to the Promenade is the Baltimore Water Taxi which has a string of nodes along the Promenade. It, too deserves to be something that brands Baltimore like, London is branded by its red buses. Although the water taxi is popular with tourists, it is hard to figure out, the landings are almost invisible and its potential is far from tapped. This may soon become different once Under Armour puts its mark on it, but little is known to date, how the system will develop.

Other attempts of networks of strength also failed to reach a level where they persist as recognizable attractions: for example Baltimore's rich history. A self guided Baltimore Heritage Walk is identified by little trail stickers on the ground. But once installed, they have not been maintained and kept in shape.

The oldest and most important network is of vital importance to residents and visitors: the Baltimore transit system. It is so famous for being hard to decipher and being disjointed that even the current MTA Administrator is using harsh words to describe it. A complete overhaul of the bus trails will occur on June 18 of this year. It has been touted as a transformative step. Nothing could prove better that Baltimore can actually benefit from networks that connect instead of separate, in spite of  the slogan of "City of Neighborhoods" that stresses the individual parts over the entirety. A functioning transit network is one of the great equalizers in any city.


Networks on the Web

Technology helps. Anyone savvy enough to do so can pull individualized self guided walking or biking trails up based on one's specific interest. There apps for architecture, history and everything else. Baltimore's rich urban fabric provides a dense system of overlapping networks that can be found via smartphone, for example on this GPS based app. But this type individualization defeats the purpose, of unification. All the smart phones can't substitute for a few networks that should become famous.


The success of urban networks elsewhere should be an encouragement: The world famous Highline in New York, Chicago's Lakefront Trail, Philadelphia's Schuylkill River Trail, Tampa's brandnew River Walk. Especially the new Tampa walk shows that Baltimore has to up its game. Tampa's walk has transit connections, signage, mile markers, fitness stations, art, bike repair stations, bathrooms, kiosks , creative lighting of and all kinds of innovative ways to spruce up the experience of looking out to a otherwise fairly mundane water body.