Today the 1000 Friends of Maryland made it public that their Executive Director for 19 years will step down to pursue other interests.

Nobody has represented the face of the Maryland smart growth organization more than Dru Schmidt Perkins who was known and liked all across the environmental community but also by those who care to connect economic development, revitalization and healthier communities to the question of what the right development patterns should be. Dru was more familiar with the halls of House and Senate in Annapolis than some of the younger legislators themselves due to her tireless efforts of finding majorities for the bills that promoted smarter growth, a healthier environment, land protection, water protection and better transportation. This year Dru helped to finally unravel the 35% farebox requirement that had hobbled the MTA for years and she began to address unlikely topics such as "green sprawl" that can occur if wind-mills and solar "farms" spread through farms, fields and forests unchecked.

Over her tenure, the 1000 Friends of Maryland had many accomplishments based on strong coalitions at all levels, from counties to the State. Dru trained staff so that a small group could have a wide reach, including impressive work on the local level of Charles County.  Dru Schmidt Perkin's time with the 1000 Friends shows an amazing array of legislative victories for better growth, land use and environmental protection: Critical area laws protecting Chesapeake Bay shorelines, re-forestation laws, water quality improvement laws, septic bills and stormwater runoff legislation, priority funding areas, conservation bills, better standing of citizens in court, off-shore wind and renewable energy legislation, all in all about 60 pieces of legislation that leave barely any part of Maryland's life untouched and hardly any of these not also influenced by Dru and her coalition building and lobbying for a better Maryland. 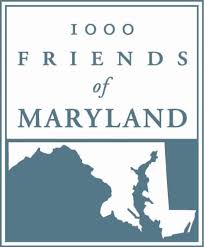 Dru was feared by some and admired by most for her sharp intellect, quick grasp of issues and their politics and her endless connections. Dru succeeded every time when it was necessary to ensure funders that 1000 Friends projects were worthwhile and earned the grants and monetary support without which no organization could survive for 23 years. As one who helped found the 1000 Friends of Maryland 23 years ago, I know that a future without Dru at the helm won't be easy for the group, its staff and board.


“I made a commitment to stay for two years and now -- 19 incredible years later -- I have decided it’s time to try something new,” (Dru Schmidt Perkins)

1000 Friends of Maryland was formed in 1994 to bring together business, developers, environmentalists, transportation advocates, community leaders, architects, and planners to work toward development patterns in Maryland that are economically, socially, and environmentally sustainable. In 1998 the organization hired its first staff (Dru Schmidt Perkins came from Clean Water Action where she had been a regional director) and ever since has been a strong voice for smarter growth in Maryland. Founding members felt that an organization linking environmental protection with a pro-development agenda would fill an important void in the polarized public discussion, where the world is neatly divided into binary world of "tree-huggers" who want to protect every blade of grass and "evil developers" who want to  pave it over. 1000 Friends, supporters and funders consider this type of binary thinking contrary to a bigger reality in which good development and environmental protection can actually go hand in hand. This premise allowed the group to become a major voice in Maryland bridging environmental, transportation and land use agendas.


“Our work to improve land use and development policy has been challenging and exciting, and it has been rewarded with victories large and small. I think back to our start in a single room rented from AIA Baltimore, and now we have a statewide effort operating out of our beautiful brownstone building in Baltimore’s Mount Vernon neighborhood.”  (Dru Schmidt Perkins)

“People are often surprised at how small the organization actually is,” said Dale Sams, Chairman of the board who has guided the board over the last several years with his Western Maryland perspective (Dale hails from Cumberland) which is proof that 1000 Friends of Maryland is far from "conducting a war on rural Maryland in favor of urban elites"  how some framed smart growth efforts in the past. In fact, 1000 Friends campaigned to "keep farmers farming" for years and has many supporters in the agricultural community.


"When you have a strong team, smart strategy, and create effective coalitions you can have a powerful impact.  The staff at 1000 Friends are truly remarkable. They are tenacious and nimble in each campaign. We thank Dru for her many successful years at the helm of this organization. Dru’s vision, leadership, commitment, dry sense of humor, and boundless energy will be sorely missed at 1000 Friends.” (Dale Sams, Chairman of the Board)

Dru Schmidt Perkins will continue in her post until November. The Board of Directors will begin a search process late spring. "I will be doing everything I can to make this transition smooth and an opportunity for the organization to be stronger than ever" the outgoing CEO assured board members in an e-mail. The successor will have large shoes to fill but will also, thanks to Dru Schmidt Perkins,  come into a well calibrated, functional and highly motivated organization.


Posted by Klaus Philipsen at 8:50 AM