Just when we thought that Maryland's Governor can not be any more retro and regressive in his approach to transportation, he outdoes himself. Sending $900 million of federal funds back to Washington and flushing $250 million of money already spent on the complete design of a new rail transit line which he called a "boondoggle" brought him national notoriety.  Announcing the nation's largest toll lane project ("Lexus lanes") right here in Maryland will get him attention again as a governor that just doesn't get it when it comes to transportation.

The people in the Los Angeles area stuck on their endlessly widened freeways in the nation's worst congestion have resolved for a decade now to abdicate the viscous cycle of ever more freeway lanes and build solid transit instead. They will be laughing at tiny Maryland trying to be more Californian than California itself. Their 405 widening has not made them happy.

Hogan's $9 billion idea of widening the Washington Beltway and I-270 plus destroying the B-W Parkway with privately funded toll lanes reserved for those who want to shell out money to go faster can only be seen as a populist pitch to his conservative base, people who believe that more lanes means less congestion, a formula that has been practiced and proven wrong for at least 50 years. The Parkway is owned by the federal government, a complete overhaul of the four lane roadway had only recently been finished, following standards of the National Park Service regarding esthetics. Widening happened only in a few sections near Arundel Mills Mall and north of MD 175, where the State already owns the road. The 1954 roadway, designed to be a scenic gateway to the Capital, carries today about 120,000 cars daily (trucks are prohibited). Where the road was widened much of the tree buffer that is supposed to give the road a "green" feel was removed.


“These three massive, unprecedented projects to widen I-495, I-270 and MD 295 will be absolutely transformative, and they will help Maryland citizens go about their daily lives in a more efficient and safer manner” (Hogan)

The "innovative" part of the tale is that the private sector would pay (Private-public-partnership P3) and the State would be getting 100 miles of lanes for free. ("No cost to taxpayers, the Gov says.) This, too is a formula that has long been proven as false, even in our home state. The Inter County Connector (ICC) was built in a P3 partnership including state money coming from "innovative" Garvi bonds and has revenue that is much below expected levels.The insane widening of I-95 north of the Harbor Tunnel also attracts little traffic because outside rush-hour nobody wants to shell out the extra money for the separated lanes. An extension of those lanes to Bel Air has been put on hold. The irony is that those two toll projects were green-lighted by Governor O'Malley as part of a grand bargain with the road lobbies so they would go along with the Red and Purple line transit projects and the transitway on Rockville Pike. Now it is more voodoo and less transit. P3 toll roads are frequently pure vodoo economics. There is no reason why Maryland of all places should build the nation largest such experiment.


“I don’t know how you fit four more lanes from Silver Spring to Bethesda without an enormous dislocation of homes and parks” State Senator R. Madaleno, Montg. Cty)


Adding four toll lanes to the Beltway would be enormously expensive, Ross pointed out.  When the State Highway Administration last studied this idea in 2004, it determined that some or all of the new lanes would have to be elevated above the existing highway.

For equitable and sustainable transit the twin-region needs massive infusions so the existing transit systems can be maintained, expanded, and integrated with each other. "The MTOC plan for transit would serve more travelers and create far more jobs and economic growth," said Gary Hodge, a former Charles County Commissioner now heading the Southern Maryland Alliance for Rail Transit. TheMTOC plan includes the Baltimore Red Line, light rail from Branch Avenue to Waldorf, and massive upgrades of all three MARC rail lines stretching from Frederick to Elkton.

To his credit, Hogan did suggest this week that he is open to funding WMATA at the tune of $500 million if the other states do the same. DC Mayor Bowser, and Governors Hogan, and McAuliffe remain divided still on how much each should contribute to the $25 billion unfunded Metro needs and how to pay for the upgrades. Bowser favors a regional sales tax, while Hogan and McAuliffe have pushed back against taxes as a funding source.

Luckily the shovel for the roadway super boondoggle won't go in the ground soon. There are many hurdles, environmental studies and federal approvals needed. So far this is nothing but a bad idea and one that must be stopped in its tracks. Not because there aren't substantial transportation problems in the Baltimore-DC Metro area but because these 100 miles of new lanes won't solve the problem, just as the toll lanes on I-95, the ICC and current widening project on the westside of the Baltimore Beltway doesn't solve them.


Now available in bookstores and online and at the Baltimore Bookfair (BAF and BOPA booth across from the Visitor Center)
Klaus Philipsen, Baltimore: Reinventing an Industrial Legacy City 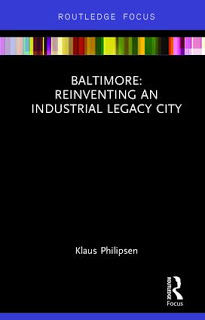 Posted by Klaus Philipsen at 8:59 AM