What exactly was behind the Metro shut-down?

Friday morning in Annapolis Baltimore County Delegate Charles Sydnor had the opportunity to ask the Maryland Secretary of Transportation Pete Rahn the same question that tens of thousands of MTA Metro riders have been asking for a week since Metro had been shut down in its entirety: " couldn't you wait for another day or two so riders could prepare?".

Rahn had just elaborated on what caused him to decide that Metro couldn't run from one day to another. At one point he said "unfortunately the engineers were off" referring to a 2015 estimate how long the existing rails would last. He than talked about the "rail slope" (technical speak: Gauge Face Angle (GFA) which is supposed to not be over 26 degrees.

Secretary Rahn flanked by administrator Quinn reported first to the County and then the City delegations. He stated that the wear had been regularly measured and visually observed, but apparently Metro doesn't have the right wear measurement tools such as "the Mini-Prof instrument and software" to get results. Rahn noted that over the observation period the angle values went up but that "some went down" explaining this with "This isn't an exact science".

In the end MTA relied on a consultant doing additional rail observations between January 23 and 29. The results are summarized in a report from the engineering firm HNTB which was made public this week and which indicates Gauge Face Angles in curves as high as 28.7, i.e 2.7 degrees above what is considered a conservative safety limit. Deviations are also measured in inches of top and side wear, anything over a 3/4" is considered beyond the safety standard. The one or the other condtion was observed in most curves above and below ground. The 26 degree metric is not universal, some systems use higher numbers.

In response to the Delegate's question Rahn emphasized: “Once we are informed that something isn’t safe we act”. He didn't say that this was more a matter of liability than one of an actual threat to life and limb, especially since trains already ran at reduced speeds of 20-25mph across the worn sections of rail. It is probably true that no train would actually have derailed in the next two days or even two weeks, but the truth is that no lawyer would absolve the MTA from the full liability should it have continued to run trains even after it had received explicit knowledge of the safety standard deviation. "We couldn't wait until summer", Rahn explained, presumably the time when a full rail replacement had been planned anyway. The bummer: Rahn explained that the current repairs won't replace the summer shutdown. That remains on the schedule.

The matter was deemed urgent enough that even colleagues from WMATA were dispatched on Monday,  WMATA being a system that has experienced a 29 hour emergency shutdown of a much larger system in 2016. WMATA's General Manager Paul Wiedefeld served as MTA's administrator from 2007-09.


"the shutdown announcement elevated Baltimore’s three-decade-old subway to poster-child status in the conversation about the nation’s decaying infrastructure on the day the Trump administration announced its long-awaited infrastructure plan". (WP)

Robert Puentes, a national transportation expert noted that an abrupt one month shutdown of an urban rail system was unprcedented in the US. There are, of course, troubling circumstances around this shut-down, including:
Governor Hogan may be motivated by the entire episode to further support magnetically propulsed and levitated trains which have no known rail wear of this kind because they don't touch the guideway, except in stations. But the general public would probably prefer that the MTA pays more attention to the everyday needs of its riders instead of chasing pipe dreams such as the Hyperloop and a 330 mph maglev shuttle from DC to Baltimore. To which Secretary Rahn responds: "We are making significant investments in transit right now", referring to planned rail investments on Metro and light rail and the new Metro cars as well as the mid-life overhaul of the light rail vehicles currently underway. Problem is, all those investments were already planned and funded under the previous Governor, including Purple and Red Lines, which are now either limping forward (Purple Line) or canned altogether (Red Line). Rahn explained happily where the money is going now, rattling down an entire litany of multi-billion dollar beltway and Interstate expansion projects.

Rail wear happens on any of those systems, the faster, the more wear. Baltomore's Metro top speed is 60mph, not earth shattering, but in tight curves it can still create the friction that one can often hear as wheel squealing.

Baltimore's anemic subway of a single line at its peak transported  50,000 riders every day. Current ridership levels (before the shutdown and single tracking) were provided as 40,000 daily riders. That is about the entire population of a city such as York Pennsylvania. Too many people to leave stranded at locked gates without access to any type of transit that would travel on the same route. Of course, the MTA realized that as well, and only the about 17,000 weekend riders were really left high and dry until the so called "bus-bridge" had been installed. The first day of the bus bridge was an unmitigated mess, but by now it works pretty well according to MTA Administrator Kevin Quinn.

A full shut-down is also planned for Light Rail in order to fix the rails on Howard Street which are in such poor condition that a layperson can see the degradation and misalignment with the naked eye. What the agency doesn't seem to understand is that jaded riders may never come back to ride the rails once they have been shut out. MTA already shut down light rail once before when it installed a second track under Governor Glendening. The system never recovered from the disruption, ridership levels that had been around the 30,000 a day projection is hovering ever since in the mid and lower 20k range. 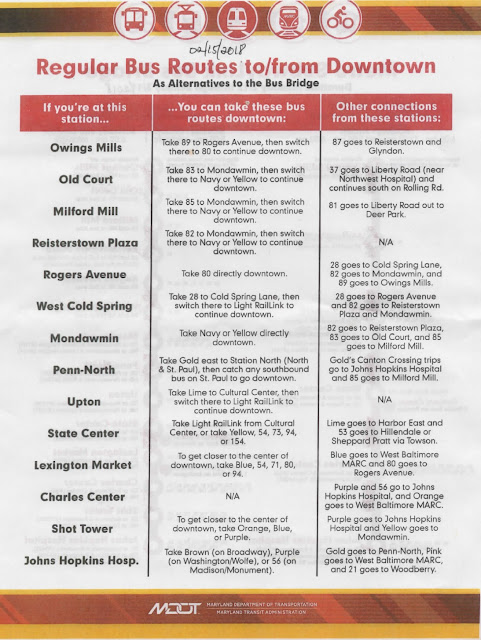 Posted by Klaus Philipsen at 10:07 AM