More bad news for Baltimore: We are now the second most shrinking place in the US

Scores of Baltimore mayors presided over a city that dwindled away under their eyes. A city that was once pushing a million residents lost more than a full third of its population, down to 650,000. Detroit, Cleveland and Pittsburgh all lost over 50%  from their peak population base, but all those cities have long recovered since and staved off further loss. Not Baltimore.

It took until 2010 until  a mayor finally said: "Enough is enough" and proclaimed to wanting not only stave the losses but grow the city back by 10,000 households in ten years. This was a message that everyone could understand, even though not everybody got that 10k households really translates into about 22,000 people. From losing about a 1000 people a month under Mayor Schmoke, Stephanie Rawlings Blake (SRB) aimed for growth of  about 180 people each month. It was modest but seemed realistic.

Yet, it didn't happen. This week new estimates from the census show that Baltimore now is the #2 most shrinking jurisdiction in the country (in absolute numbers). See table below:

No longer can Baltimore conveniently hide behind Detroit, the city that Baltimore usually appreciates as a place where everything is much worse. Although Detroit's whopping population loss is almost double that of Baltimore, the city has managed to project a come-back story around its downtown renaissance which is largely fueled by Quickbooks owner Gilbert. Today's associations with Detroit are largely positive and deal with festivals, the new streetcar, beautiful restorations and a pervasive can do attitude that includes the neighborhoods.

Baltimore, by contrast has not succeeded in projecting a sense of direction in which all the puzzle pieces nicely fit together and progress is made in such a manner that positive feedback loops can unfold, even though plenty of good initiatives are underway, many successful. Still, actions seem reactive and more designed to breathlessly follow developments instead of creating a clear path that every agency follows. 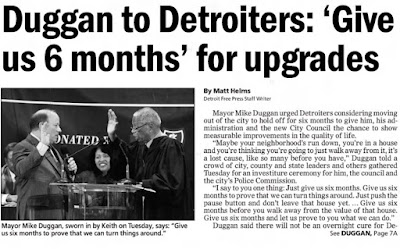 Detroit's mayor Mike Duggan who came into office in 2014, immediately asked people to give him six months before they decided to move out of Detroit. With a clear commitment to better services, targeted investments and true community participation centered around equity. Motto: "Every neighborhood has a future" the exodus out of Detroit has slowed to a trickle since 2014 and Detroit conveyed the image of a city that has begun to get things under control.

It isn't overly surprising that Baltimore didn't manage such a remarkable come-back story. Although SRB's goal of population growth was right on the money, there was little strategic follow through to ensure population growth. No breakdown of neighborhoods with specific population targets was ever provided nor was there any strategy that identified which segments of the population were the most likely to leave and what it would take to prevent their departure.

Instead, the administration just continued the same programs they always pursued, namely inviting development along the water and downtown where it happened anyway. Baltimore did, in fact, attract a lot of younger people to move into all the new apartments, but it failed to stop others from leaving the established neighborhoods. The unrest, the police scandal and the exploding crime rates certainly didn't help, nor does it help that the schools don't seem to be able to escape the bad spell hanging over them, in spite of record money being poured into new school construction. The Governor's on and off "love" for Baltimore doesn't help either. His project CORE has funded some great things but there is no sense of systematic investment that would add up to a bigger picture, just a sense of accelerated demolition. His measly transit substitute for the Red Line, the rebranded bus system, may slowly get its bearings, too late though, to be remembered by anybody as a convincing success story. Whatever headway was made in MTA's credibility got lost again when the Metro had to be shut down so suddenly. The promise that the Gov is committed to rebuilding State Center sounds like empty rhetoric in light of the law suits he filed at the same time.
The Mayor is correct, Baltimore has not been able to develop a convincing narrative, but evidently overlooks that she could create that narrative out of her own office.

Barring major catastrophes being generated in the crazy capital of our nation, and assuming continued growth in the region, Baltimore still stands a good chance of turning the corner and truly becoming a growing city again that upwardly mobile people would continue to see as an attractive destination, and that at the same time, long-time residents would find sufficient motivation to stay put. There are certainly enough people eager to fall in line once a persuasive strategy would be in sight.

Until then, business as usual means more bad news.

Posted by Klaus Philipsen at 8:03 PM