I have long held the opinion that if there is one silver bullet that could solve multiple Baltimore problems at once, it would be growing the population of the City. (See my November article, Grow the City!).
Now a study titled  "An Analysis of Baltimore City’s Residential Market Potential" released by the non-profit organization LIVE Baltimore suggests that it could be done.
The study demonstrates that the City’s residential housing market is strong, and that additional housing stock is needed to meet it. Zimmerman/Volk Associates (ZVA), conducted this first-ever analysis of residential market potential for all of Baltimore City. The study addressed these questions:

•Where the potential renters and buyers of new and existing housing units in Baltimore are likely to move from (the draw areas).
• How many households have the potential to move within and to the City each year if appropriate housing units became available (depth and breadth of the market).
• Who the households are that represent the potential market for new units in the City (the target markets).
• Housing preferences of those households—rental or ownership, multi-family, or single-family.
• What the target households can pay to rent or purchase new and/or
renovated dwelling units in the City.
• How quickly the new/renovated units will lease or sell (absorption forecasts).

The analysis projects that between 5,300 and 7,100 households would rent or buy new or significantly renovated homes each year over the next five years if such homes were added to the City’s housing stock. Those would be in addition to those households renting or buying units now.

Filling this number of additional housing units would be a major step forward as it would help grow the population, generate new economic activity, and expand Baltimore’s tax base. 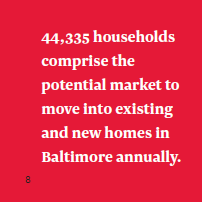 “These numbers suggest a bright future for Baltimore City, and they tell us clearly who makes up the potential residential market. Policy makers should use this study to inform strategies that increase the number of people living in the City. If we renovate or build the right kinds of housing at the right prices, we can retain and attract thousands more Baltimoreans. These numbers provide a roadmap for how the City can grow its residential base and become stronger economically.” (Anne Milli)

The report clears up which key demographics constitute the largest potential residential market in Baltimore City:  63% young single people and childless couples, other families of all kinds account for  a distant 21%, and retirees and empty nesters trail with just 16 %. This breakdown isn't exceptional for Baltimore since nationally only 22% of households are still the traditional family with children. Like it or not, the study seems to suggest that Millennials, indeed, drive the influx of new residents. But there is a counterforce at work so that the City still lost overall population: More people are moving out than are moving in. The Zimmermann/Volk study appears to suggest that moving out could also be driven by lack of the appropriate housing since it identified the demand in the market as stemming 2/3 from existing residents and 1/3 from coming form the outside:
The study concludes that the potential residential market is made up of households of all incomes would look for homes to buy or rent in a wide range of prices including some that would need financial assistance or subsidies for housing. The lack of quality affordable housing has long been established along with the fact that the available resources are far smaller than needed to meet the demand.

But as LIVE Baltimore emphasizes, there is also a healthy demand for mixed-income with more than a third of households identified in the potential market having incomes that meet or exceed the average for the region. This finding matches the experience of 2019 and even COVID year 2020 as the best years for Baltimore’s housing market in a decade. The study also identifies what type of homes potential buyers and renters would look for:
New Mayor Brandon M. Scott who can find various grow the City recommendations in the Transition Report released this Tuesday (2-9-21) said about the LIVE Baltimore study: “It’s clear from this report that we have momentum to build on as we grow our city and reimagine equitable economic development in Baltimore.” The study authors clearly hope that the Mayor and his department heads will take the study to heart. They imagine it to be used for:
This is a lot of expectation for a study that essentially concludes that Baltimore could grow by an additional 5,300 households each year for the next five years if enough housing could be constructed or renovated. It is very close to what Mayor Stephany Rawlings Blake established as the first ever specific growth target for Baltimore and that she failed to achieve in the end, because having a potential market alone isn't enough to actually realize it. This growth would be about 53,000 residents in five years (assuming an average household size of 2.0 persons), in my estimation less than half of what the City would need to eliminate residential abandonment and achieve fiscal stability.
The study does not address the various housing submarkets in Baltimore (apparently work is underway to study "micro-markets")and their very different attractiveness for the identified market nor does it address the annual supply of new and renovated housing units, whether the the supply pipeline matches the market and where the major discrepancies between supply and demand  are or how they could be alleviated.  Hopefully Mayor Scott will establish not only a specific growth target but also the policies to actually achieve it.
Klaus Philipsen, FAIA
Posted by Klaus Philipsen at 6:01 AM