Notable preservation designs that received awards from Baltimore Heritage included the Fells Point Police Station, the Shakespeare Theater, 520 Park Avenue, the second floor renovation above City Cafe and MICA's conversion of 1801 Falls Road into their Social Design department and many others.

Marty Azola received the Douglas Gordon Award for his many decades of developing outstanding preservation projects from the Towson jail to the just recently completed Ivy luxory hotel.

Maybe most memorable was Mark Thistel's introduction for the award to the Downtown Partnership for their 2011 initiative of the downtown designation of historic landmarks, a significant change of mind regarding historic preservation.

Among the awards were two about historic Baltimore communities. Naturally, I am happy to report that the Druid Heights Community Development Corporation  (DHCDC) and "Community Architect" ArchPlan, my firm, got one of the historic communities awards for restoring 10 historic but completely dilapidated rowhouses on Druid Hill Avenue and McCulloh Street for first time homebuyers. (The DHCDC Gateway Development). MC Mark Thistel did not fail to mention that those homes are located within a 1/2 mile of North and Pennsylvania Avenues, the core area of the West Baltimore unrest, an area with scarce investment.

This was not an easy task, because those houses were mere ruins (see photos below) when we started under a program for tax credits really designed for homeowners and not a CDC.  There were marble wainscot panels to be collected in the basements and installed back at the entry vestibules, balusters to be constructed from scratch while newel posts that had somehow miraculously survived in some instances needed to be kept. One ruin had to be clawed back from city condemnation and all had to be documented in the lovely three part tax credit applications to be filled out for each property individually and approved by both the Maryland Historic Trust (MHT) and the National Park Service.

There is some irony to the current condition that such buildings either perish entirely by neglect or they are restored to the famous Standards of the Secretary of the Interior which are, shall we say, meticulous. There should be something between these extremes, but that is another story. 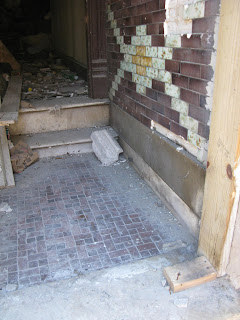 The Gateway Housing Development (Gateway) targeted vacant buildings existing between the 1800 – 2200 blocks of McCulloh Street and Druid Hill Avenues. These streets serve as the main entry and exit through fares for the neighborhood. The Gateway Development will also rehabilitate vacant houses on targeted blocks in order to stabilize that area of the community.
The Druid Heights community is located within the Old West Baltimore Historical District. The revitalization of the homes will provide opportunities for potential homeowners to benefit from Maryland Heritage Structure Rehabilitation Tax Credit issued by Maryland Department of Planning and the Maryland Historical Trust.
All houses will include “Green Building” amenities that will include modern kitchens and bathrooms with all new appliances. The houses will contain all new roofing, flooring, and heating, plumbing and central air conditioning systems. The total square footage of the houses ranges from 1,400 – 2,257. Sales prices start at $109,000.

Posted by Klaus Philipsen at 6:17 AM