I am not one who "loves" his car or has any particular brand allegiance. I can show a good amount of car promiscuity to any doubter, a list from Renault, to Citroen, Toyota, Honda, Chrysler, Subaru and Volkswagen may attest to to that.

My criterion was always frugality in consumption, a good cost to value ratio and, once I had family, safety. That is how I wound up with a 2010 Volkswagen Jetta Diesel, a car that seemed to be even more environmentally friendly than the Prius (no battery of batteries). This is how hundreds of thousands came to buy a VW "clean Diesel TDI", vehicles that constituted eventually 60% of the car Diesel market in the U.S. (Which, unlike in Europe, is only 1% of all cars here).

In 2009 VW passed the California emission standards with their new Jetta and Golf models. Those standards had prevented VW to sell their previous Diesel models there and later, when Maryland and others adopted those same standards, ended the older Diesels here as well.  2009 was supposed to be a technological break-through that combined "clean" and Diesel, it was also the time when the U.S. made low sulphur Diesel mandatory at the pump, so the clean prose seemed plausible.

This vehicle got me actual 50mpg on highway trips and at least 36-40 mpg in the city, even in winter. So I felt good about myself and my car, taking some of the guilt of driving a car altogether. There were, indeed, no black plumes at the tailpipe, ever.

Now this: Volkswagen is accused of grave and criminal "defeat devices" that set the on-board engine management computer to kick in some emission control devices only while it is checked for emissions (they are read from the on board computer these days, not from the tailpipe) and then turn them off again, supposedly for a smoother or more powerful ride, (the actual motives for turning the control devices off are not exactly clear yet). Volkswagen pretty much admitted of having done exactly what they are accused of since 2009 up to even their 2016 models. So much chutzpah, so much stupidity!

That huge misuse of the trust of their customers became a suspicion and certain aspects came first to light as early as May 2014. VW responded with a bogus "patch" through a recall action but did not confess until yesterday as a result of new July 2015 findings that even after the patch street tests did not replicate the lab tests. I recall that patch in which I participated as a very oblique affair. It was VE's opportunity to revert the program, but apparently the results would be so unsatisfactory for the car owners, that VW did not rectify the situation then but just extended the cheat.

This is why I feel betrayed, even though I did never really "love" my car. But I thought I had something that it wasn't in real life! For some who drive around with 350hp muscle cars or 8 cylinder trucks that get 12 mpg, this feeling of betrayal may seem foreign. After all, I got my 50mpg, didn't I? But I got it by blowing up to 40 times as much NOx into the air than the standard would allow, NOx being precisely the Achilles heel of Diesel cars anywhere, that and fine particles. Will VW tell me next that the particle filter also works only in test conditions? (Diesel has more energy than gasoline and is burnt at much higher temperatures than gasoline. This is why it has lower CO2 emissions than gasoline, less fule consumption but much more nitrogen oxides which form smog).

Larger Diesels from Mercedes and other brands use uric acid injection from a small separate tank to bind NOx. But VW had told us that this wasn't necessary for the smaller four cylinder engines they sold in the Jetta, Golf and Beetles. Ha!


NOx pollution contributes to nitrogen dioxide, ground-level ozone, and fine particulate matter. Exposure to these pollutants has been linked with a range of serious health effects, including increased asthma attacks and other respiratory illnesses that can be serious enough to send people to the hospital. Exposure to ozone and particulate matter have also been associated with premature death due to respiratory-related or cardiovascular-related effects. Children, the elderly, and people with pre-existing respiratory disease are particularly at risk for health effects of these pollutants. (EPA)

I hope there will be a class action suit to force them to buy back these cars which most certainly will be recalled and which just lost resale value. Once a fix is applied that brings them into NOx compliance, the car either will use more fuel, or have less performance unless VW agrees to spend a lot of money installing the urea injection retrofit on each of the 485,000 affected cars.

I am mad with Volkswagen. If they have to pay billions of dollars in fines, as EPA said they may have to, its fine with me. Their stock plunged 10% in one day today. Friday Martin Winterkorn, the CEO of VW and known to be man who is interested in all the details, is up for  reelection as top manager. There is now talk of 11 million cars affected, if  true, that would make Wintercorn toast and the now world's largest car company possibly as well. The story has moved to the top in Germany, pushing aside even the refugee crisis. Volkswagen has 600,000 employees worldwide.

Klaus Philipsen, FAIA
The article was updated several times. Thanks to Jeff Kunce for valuable input. 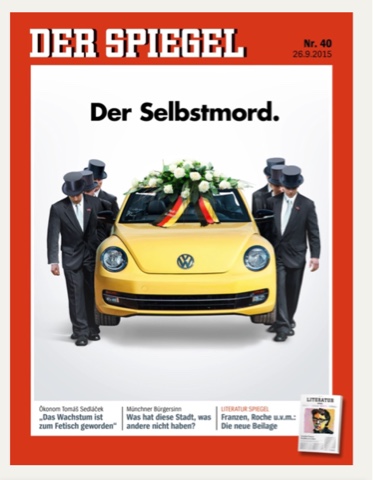 Posted by Klaus Philipsen at 5:34 AM