How transit doesn't get done

When taking a position relative to Hogan's new Baltimore bus proposal it may be instructive to remember why it was so easy for him to kill the Red Line. His Baltimore Link Bus idea may fall victim to the same lack of resilience that made the Red Line so vulnerable.

Chief vulnerability: Not enough community buy in. Years of work in and with the communities produced a few ardent Red Line supporters but by and large the community took a wait and see attitude, was lukewarm, some were openly hostile and certainly there were no masses ready to go and fight for the project.

Second and a close cousin is lack of "skin in the game by key stakeholders". Again, there were some ardent supporters, but most had long taken the wait and see approach. Even Mayor Rawlings Balke who had eventually become an ardent supporter had taken her merry time to warm up to the project and to include it in her speeches and considerations. Her counterpart in Baltimore County, Executive Kamenetz waited until the project was dead before he became a strong supporter. Before he provided regular lip service in favor of the rail plan but also did not refrain from criticizing the project with non-factual statements such as that it didn't connect to anything. There was little County action to really take advantage of the Red Line.

Worst of all, private developers never really became part of the project in such a manner that their own projects wouldn't be able to happen without the transit line. Canton Crossing, the Broadway project in Fells Point, Paterakis' new Whole Foods project and Michael Beatty's Harbor Point are all large developments that all could have been perfect Transit Oriented Developments but were not designed as such. All should have received City benefits only if they would make the transit project an integral part of their projects, namely through less parking and integration of station facilities into their buildings.  Instead Paterakis put actively hurdles into the project's path  and every developer planned the development so that it could work just as well without the Red Line.

Naturally, they would observe at this point that they are glad they did. To which I would respond: Look at Denver: Only if everybody locks himself in and takes the risk of doing so, things actually happen. Wait and see just doesn't make these big endeavors a reality. 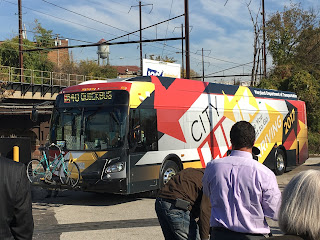 How is this relevant to Hogans City Link bus concept?

Well, the point is that folks are once again moving carefully to the sidelines. This looks interesting they would say, let's see if it works. Let's see if "they" can pull such a big change off.
And if the bus project goes up in flames or runs into a wall of opposition, one can return to the good old Baltimore conviction that one can't get these things done here. In Houston or Denver, maybe, but not here.

What this attitude fails to see is that it is precisely the reason why things fail here.

Anybody who thinks that Baltimore deserves a better working bus system should support the MTA and the Secretary of Transportation so their bus reform can succeed. Having skin in the game would mean to get involved and "own' some part of the reform until the proposed project actually becomes the improvement that is promised.

This isn't to say that one accepts the somewhat unspoken premise that these bus reforms are a substitute for robust rail investment (they are not) or that one accepts that Baltimore doesn't deserve anything better than buses. Nor should it mean that there wouldn't be tough questions regarding the draft plan.

But what everybody should be able to agree on is this: Baltimore deserves, and the MTA owes us a bus system that performs better than the current one. From that insight flows directly that change is unavoidable. Let's make the change as good as it can get. Let's leave the ranks of spectators and join the ranks of doers, contributors and constructive criticism. Even the Mayor must come out of her pouting corner, interact with Hogan's people and find out what the city can do to make the buses run faster. No side can do it alone. That is what the Red Line showed.

Posted by Klaus Philipsen at 8:21 AM