One could gripe about one family's oversized influence on the fate of this city, but there is no question that the private development of Sundance Plaza has given  Fort Worth a town center. This city of 813,000 people which is growing as fast as almost no other US city with its version of the Baltimore's Downtown Partnership created as early 1983 has gone a long way on the road towards a vibrant and walkable downtown in a Texan city that is fixated on the automobile as many other southern and western cities are and more so than its sibling Dallas right to the east with its extensive light rail system.

For those who arrive here expecting one of those bleeding downtowns with more parking lots than stores, Fort Worth is a very pleasant surprise. There is bike-sharing, there are well designed sidewalks, a free circulator bus, free evening, almost 60 miles of Trinity River trails and weekend parking. Then there is Sundance Square Plaza and with it a slew of new development. Several thousand people have moved into the downtown TIF zone and the benefits district, both hallmarks of Downtown Inc and more than a thousand more apartments are in the pipeline.

Sundance Plaza was added to the intersection of Main and 3rd Streets when a couple of parking lots were converted in a $110 million project to make them a pedestrian-only town square, giving Fort Worth a true center, a beating heart of traditional urbanity and a gathering spot for civic celebrations.

The 55,000-square-foot Sundance Square Plaza includes a performance stage, a fountain, a wave wall, bike racks and four 32-foot-tall, operable white umbrellas providing shade during the day and coming to life with lights at night.

Surrounding the square are three new mixed-use buildings, with retail/restaurants on their ground floors But it’s not all about the sleek and the modern and that makes downtown Fort Worth interesting. Included with the new construction were also preservation projects. Then there is art in the form of the Chisholm Trail Mural, with a prominent place on the northwest side of the plaza.

The idea of Sundance Plaza was helped when Project for Public Spaces leader Fred Kent (PPS) from new York who also advised about Baltimore's Center Plaza, commented that Sundance Square without the parking lots could become one of the best squares in the country comparing the potential to the famous Polish Square in Krakow.

The private Bass family's influence is visible not only around the Sundance towncenter development activities but also in plans to expand the aging convention center and to build a new convention hotel but also in the shut-down of the fully funded streetcar plans. What one place's governor is the other private billionaire.

Sundance Square Plaza and its success after it was completed in 2013 as an example of place-making and of the fact how much people yearn for urban places where to hang out and watch other people. The area that had been popular even before the parking lot conversion has multiplied its retail sales in the last 15 years more than tenfold and has become an attraction that people come to experience from around the region and even Dallas. Last Sunday night at 10pm the place was still very lively with kids playing around the water jets and the huge Christmas tree decorating the place centered on Main Street. There are cafes, restaurants and shops and the merry street-life extends a few blocks in each direction, not a huge downtown by European standards for a city that expects to reach a million residents sometime before 2030 but still pleasant and intimate, in spite of large glitzy offices that tower over small historic buildings. Even the tallest highrises are decked out in bands of holiday decoration giving the skyline a very festive decor. 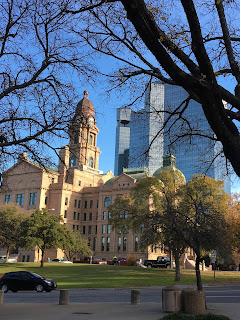 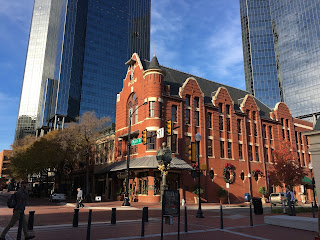 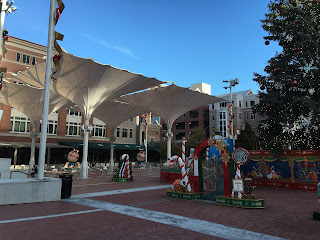 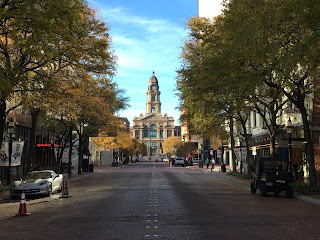 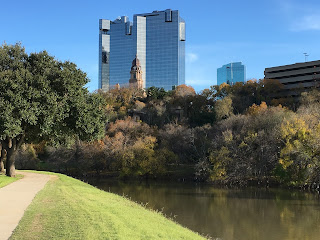 Posted by Klaus Philipsen at 5:02 AM