How to Revitalize Pennsylvania Avenue

Baltimore's Pennsylvania Avenue has been the subject of history lessons, urban stories and folklore and numerous planning studies. Another one will get underway this Mobday and Tuesday as part of Mayor Rawlings Blake's LINCS projects, studies of several commercial arteries throughout Baltimore.

Leveraging Investments in Neighborhood Corridors strategy, an effort focusing on revitalizing the major corridors that connect Baltimore City’s neighborhoods and communities.
LINCS will aim to enhance both the aesthetics and the economic vitality of these key gateways, with an eye toward ensuring that these commercial corridors better reflect the strength of their surrounding and supporting communities.
“These corridors play such a critical role in shaping both the perception and the reality of adjacent communities,” said Mayor Rawlings-Blake. “Under the LINCS model, we will leverage existing city programs, combined with other initiatives launched by my administration, to maximize the many unique strengths of each of these corridors.”
Coordinated through the Baltimore City Planning Department, LINCS will identify a team for each corridor, consisting of a design planner, transportation planner, commercial market analyst and Baltimore Housing representative.
While the teams perform assessments, they will engage with area civic, business and community partners to develop and implement strategic actions focused on improving the areas of economic development; land use and zoning; transportation; public safety and health; and sanitation.
LINCS will initially be piloted in five heavily trafficked corridors within the City of Baltimore:
Greenmount Avenue, from Eager Street to 29th Street
Liberty Heights Boulevard, from Druid Park Drive to Northern Parkway
Central Avenue, from East Fayette Street to Fleet Street
East North Avenue, from Greenmount Avenue to Belair Road
Pennsylvania Avenue, from North Fulton Avenue to Martin Luther King Jr. Boulevard
As the LINCS strategy is fine-tuned, it is expected that the effort will be expanded to additional corridors.(Mayor's Press Release 7/27/15)

What are TAPs?
The Urban Land Institute (ULI) of Baltimore will provide technical assistance for those corridor studies in the form of TAPS, defined on the ULI website as follows:

Technical Assistance Panels (TAPs) are part of the ULI Advisory Services program. TAPs were designed to be run and implemented by District Councils, the local chapters of ULI. Panelists for these one- to two-day work sessions are selected from the District Council’s membership to address land use challenges that require local knowledge to resolve. As with other Advisory Services panels, the scope of the work is defined by the sponsor. An objective team of seasoned professionals forms the panel, and its recommendations often build upon the community’s existing accomplishments. As always, the outcome is of the high quality for which ULI is known. 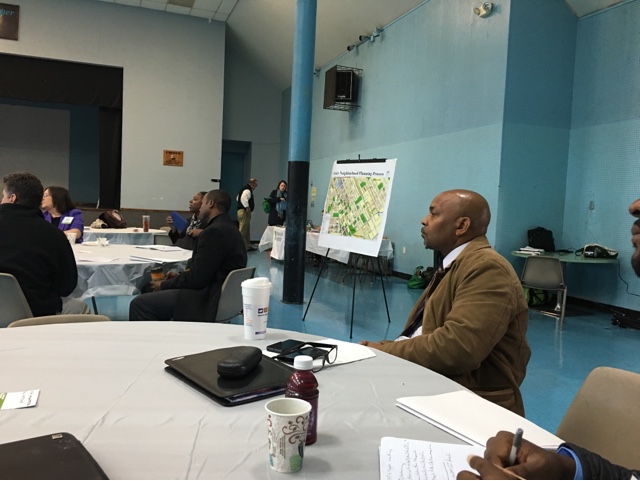 Pennsylvania Avenue History
For a better understanding of the history, I copy here in full what Soul of America, an African American travel site has to say about the Avenue:

Mention the heyday of Pennsylvania Avenue to any Baltimore native born 1950 or earlier and you are sure to revive tales of limos, lined up one after the other on "The Avenue". Restaurants dished out Soul Food and Seafood with equal parts gusto.  Nightclubs jumped with all the electricity of the latest dances. Big names in Black entertainment, business, education and politics showed up to see and be seen on The Avenue.
A large concentration of historic Black churches settled in the area prior to and after the Civil War. In 1925, Frederick Douglass High School was one of the best Black high schools in the nation. Morgan State College trained many Black professionals living in Baltimore. In the 1920s-1930s, racial assertiveness grew leaps and bounds in the city. African Americans battled discrimination in education and led a successful Don't Buy Where You Cant Work campaign to force stores, including many on Pennsylvania Avenue, to hire African American workers.  As a result communities around the Avenue produced Black doctors, dentists, real estate agents, physicians, attorneys, pharmacists barbershops, hair salons, who also formed a number of self-help associations and business leagues.
Although most Pennsylvania Avenue stores were owned by European Americans, they had a difference you felt in your gut. African Americans could try on clothes -- something not allowed elsewhere. On the Avenue, you could buy practically anything and holiday parades gave the area a sense of panache. The Avenue was a Jazz Mecca. On The Avenue, you were Somebody!
Change brewed in the mid-1950s, as African Americans slowly won opportunities to expand their livelihood throughout the city.  Pennsylvania Avenue held on by its reputation for entertainment, the churches, and with promotional coupons to patronize small businesses on The Avenue. Then the 1960s arrived. TV became commonplace and downtown theaters completely desegregated, reducing the need to visit a Black movie theater. The Black middleclass gave more patronage to downtown department stores and banks. Those gradual changes slowly weakened The Avenue, but rapid change came in April 1968.
The riots after Dr. Martin Luther King, Jr's assassination in April 1968 were devastating.  Merchants of all colors were looted. When those merchants collected insurance checks and moved their businesses from the inner city, the Black middleclass followed. A second rapid change was caused by an urban redevelopment that disrupted businesses along Pennsylvania Avenue – a new subway line. Caught in the crosscurrents, the Avenue reached such a tattered state in 1971 that the Royal Theater was needlessly torn down by city officials without major protest by the community.
Fortunately, Jazz has returned to The Avenue Market and community revitalization efforts are underway, including the placement of more historic site markers. Arch Club is still open at the corner of Pennsylvania and North Avenue. But one desperately missing piece is a cultural magnet to attract crowds again. Based on Baltimore's track record with the rags-to-riches redevelopment of other districts, anything is possible when the city puts its heart and mind to it. An African American Research Library, Cab Calloway and Chick Webb monuments at the Royal Theater site would do nicely. Maybe someone will convince Baltimore’s Great Blacks in Wax Museum to move here as well.

Baltimore Heritage has established as self guide Heritage Trail through the neighborhood:

I have been a panelist on several national ULI Advisory Services programs for Arvada, Co, Raleigh Durham Airport, NC and Anna Maria Island, Fla. and will participate in a panel in Fort Worth, TX in December to study the future of a public housing complex.
Posted by Klaus Philipsen at 4:54 AM