The is increasing evidence how important parks and open spaces are, thanks to among others, The  Project for Public Spaces in New York that has devoted its entire existence to this cause.

Zoning requirements for open space often have not caught up to the insight that smart growth, dense, mixed use urban development and open space preservation go together and are not opposites.
Too much regulations are still mired in the post war pattern of uses segregated subdivisions with open space created for each development, creating a patchwork of set asides that were essentially useless as placemaking elements or for  green infrastructure.

Baltimore County is reviewing their open space guidelines and their waiver fees today in a Planning Board meeting based on a staff report on the current waiver fee structure.  Current rules were recognized as


There are many questions:


There seem to be strong forces at work who don't see the bigger picture and the fact that, in the long run, developers and residents alike are winners where good parks, trails and open space amenities make good communities.

I will testify at the Planning Board today on behalf of NeighborSpace, an urban land trust devoted to open space protection. 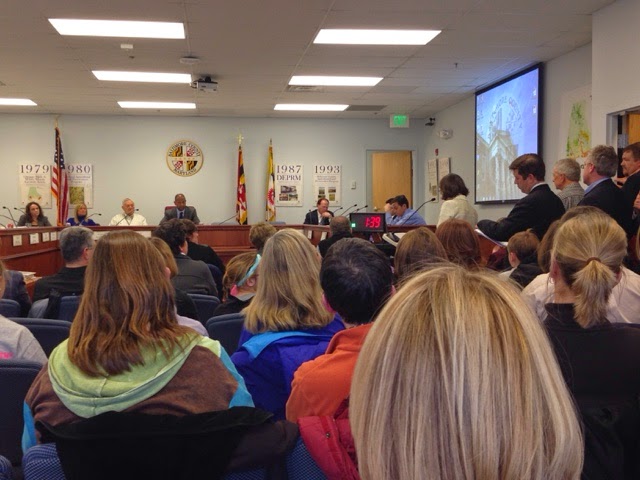 Overflow crowds in Towson for the Planning Board hearing about open space fees protesting the fact that core areas in the county are totally exempted from paying for or building open spaces and the administration recommends to continue this failed policy.
Update 17:34h

Posted by Klaus Philipsen at 6:43 AM