Resilience and Towers on the Waterfront

Resiliency has arrived at your door steps: Literally. Two new waterfront developments are faced with a new Baltimore City requirement to build first floors of residences and commercials structures 1' above the 100 year floodplains established by FEMA.

The designers of the News American site took the raised floor to go all the way to a nearly 500' tower. See Business Journal report here.

The hotel and residential tower proposed for the long-vacant 300 E. Pratt St. site on the Inner Harbor is now in the running for among the tallest buildings in Baltimore.
The limitations on the narrow surface parking lot across from Harborplace are now coming sharply in focus as the development team has been forced to increase the height of the tower to 48 stories, much higher than the previous 430-foot proposal. A 48-floor building is likely to top 500 feet, putting the proposed building in the ranks of city skyline mainstays like the 529-foot Transamerica tower.
The core issue in imagining the 300 E. Pratt St. tower is this: The smaller the piece of prime real estate you build on, the taller the tower has to be to make the project financially viable. The lead developer for the proposal, Comstock Partners, wants to install 400 residential and 200 hotel units with first-floor retail on the site.
In plans presented to the city's Urban Design and Architecture Review Panel on Thursday, officials for HKS Architects acknowledged the site where a building can go is shrinking. New flood regulations mean the tower has to sit eight feet above street level, forcing architects to use precious land for stairs and ramps that provide access to the raised first floor of the tower instead of using it to increase the size of the building.
That reality puts a serious squeeze on the developer, which now has to fit the same number of apartment and hotel units into a smaller space. The result is a much taller tower, but also a new design that won praise from the city's review panel on Thursday.
"I love that you’ve taken the constraint and made it into a positive," said David A. Rubin, a UDARP panelist.
Thursday's meeting, however, only focused on what's known as "massing" — what the size and shape of the building will look like. It didn't touch at all on important architectural details such as windows, doorways and balconies for the apartment units.
Even so, it was seen as a major step forward for a proposal that got mixed reviews when the development team went before the panel in December. For a site that has been among the most frustrating pieces of undeveloped land on the Inner Harbor, even the most incremental steps like Thursday's hearing are seen as major leap forward.

A later article in the BBJ after this posting:http://m.bizjournals.com/baltimore/blog/real-estate/2015/03/how-architects-are-dealing-with-strict-flood.html?ana=e_bal_real&s=newsletter&ed=2015-03-23&u=J+HOmxBC%2FdXBdcF5E3a4uA021ee55f&t=1427138653&r=full
Images from that article illustrate the Pratt Street side entry design: 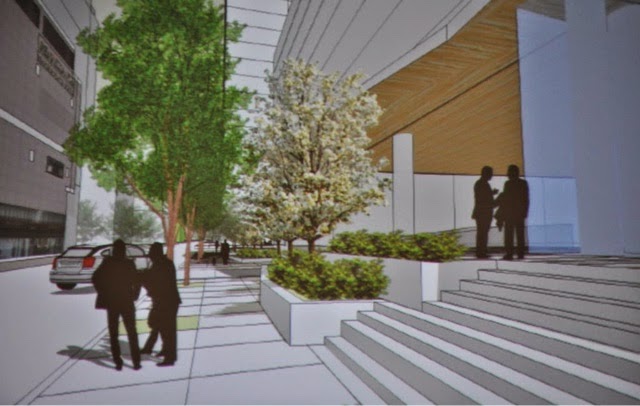 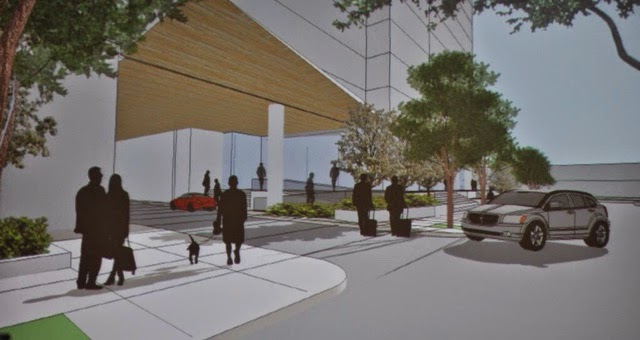 Posted by Klaus Philipsen at 5:59 AM