Where is Baltimore the most gentrified?

I continue to maintain that the term "gentrification" is not helpful. Yet, it is now used even in publications like "Governing". The real issue is the extreme bifurcation of our city into areas of disinvestment and those that are flourishing. The fact that some areas are added should be reason to celebrate and the concern should be how to bring additional areas into the fold of neighborhoods that receive new residents.

Comments on my Facebook page rightly pointed to the difficulties that come with such change, not all of those are good. If gentrification means cultural imperialism, i.e. that the newcomers dictate their culture that would be bad. Remington, one of the newly "gentrifying" areas hopefully remains an example where change is done sensibly and displacement remains an exception. 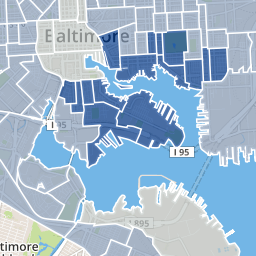 Compare the above map with those below from the ULI/NHT Partnership for building re-use in which Michael Powe showed correlations between income, age, age of buildings, "granularity" and "character score".

Posted by Klaus Philipsen at 12:40 PM