It is another "Big Data" day for Baltimore and as we have started to get used to, the numbers aren't always good. A new Massey report shows that the number of hyper-segregated metro areas in the US has almost halfed, but Baltimore remains among those cities that still are.


The concept of hyper-segregation was developed in 1989 by Douglas Massey, currently a sociologist at Princeton and director of the university’s Office of Population Research. Its social effects are predictably terrible: poverty, crime, and bad schools among them. But as Massey reports in a new paper in the journal Demography, the number of U.S. metro areas suffering hypersegregation seems to be on the decline—down from 40 in 1970 to 21 in 2010. (CityLab)

Baltimore, Maryland, and Ferguson, Missouri, share more than being the sites of racial strife over the past year. Both are part of metropolitan areas where black residents have been hypersegregated for the past four decades, according to Princeton researchers. (Princeton press release)


The other set of data comes from our very own Jacob France Institute at the University of Baltimore and its Neighborhood Indicator Alliance, brief #3 under the title "Grow Baltimore", an investigation in the data aspects of the Mayor's initiative to grow Baltimore by 10,000 households.

this set of findings from the the report may not come as a big surprise:

Migration to and from Baltimore City:

 38% of residents anticipate moving out of Baltimore City within 3 years.

 20% of Baltimore City public elementary school students who do not participate in the Free and Reduced Meal program transfer to other MD public schools each year. 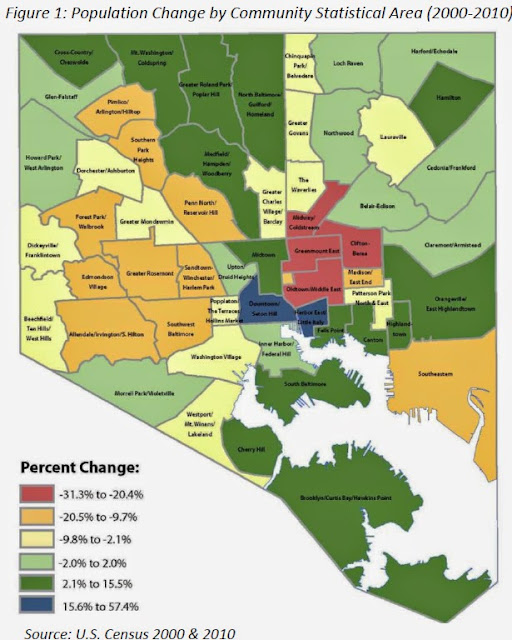 The report comes at a time when Baltimore is taking a long hard look at everything that has been tried before to see what has worked and what hasn't. While the city has been successful in attracting immigrants, millenials and students, it has been unsuccessful so far in turning the in-migration into actual growth. Too many families still leave the city.