The national trend towards cities continues.

Not New York or San Francisco are the big winners in national urban growth trends but these cities according to a Brookings study by demographer William Frey:

" the fastest growing big cities in America over the past year: Seattle, Austin, Texas; Orlando, Fla.; Durham, N.C.; Henderson, Nev.; Denver; and Fort Worth, Texas. All grew faster last year than they did the year before. Austin gained more than 25,000 people.

Anyone who has been to these cities knows that the sunbelt cities among them are not dense and often struggle to gain some urbanity. Of course, some like Austin had good success with that.

The study says:
In the city versus suburb realm, the new numbers once again affirm a reversal that counters decades of suburban-dominated regional growth among metro areas with more than 1 million people. Now, for three years running, primary cities are growing faster than their suburbs (See Figure 2). 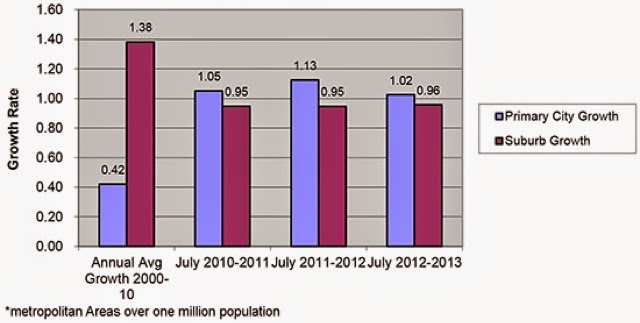 Baltimore's growth aspiration of 10,000 households over 10 years seems outright anemic by comparison, especially considering that the city sits in a still pretty rapidly growing region. We need to continue to aim for growth, the only way to address the many urban ailments.

Posted by Klaus Philipsen at 9:47 AM