Why Building the Red Line is a Good Investment

The new Republican administration under Governor Hogan keeps pointing to the Red and Purple Line light rail projects as too expensive. How much too expensive? In a recent interview Hogan was heard responding "mucho mucho".

The projects with $2.9 billion and $2.4 billion each are certainly expensive, no doubt about it. What is too expensive depends on the return on the investment.

Various speakers at today's rally to support the Red Line pointed to the benefits they see, including now also the benefit that the Red connects the impoverished neighborhoods west of downtown with its much more affluent brethren to the east.

"We are on board with the Baltimore Red Line" says Mayor Stephanie Rawlings Blake. "Make sure we are not wasting this once in lifetime opportunity".

"Diversity is our promise", Congressman Elijah Cummings called out to the crowd. "We are all united about the Red Line". However, many were absent, especially Baltimore City Council representation was weak. "We are urging the Governor, we need you to approve the Red Line", Cummings exclaimed. "Don't let the sun go down on this wonderful opportunity".
Senator McFadden added: "don't through Baltimore off the train!" .
Delegate Brooke Lierman called the Red Line a "unity line" and added that "public transportation should act as an equalizer.

Don Fry of the Greater Baltimore Committee (GBC) who had just completed his annual meeting with over 800 participating business members in favor of the Red Line.
"The Red Line is one  of only six projects approved by the federal government for funding. "This opportunity will not come again for a long time", Fry said. 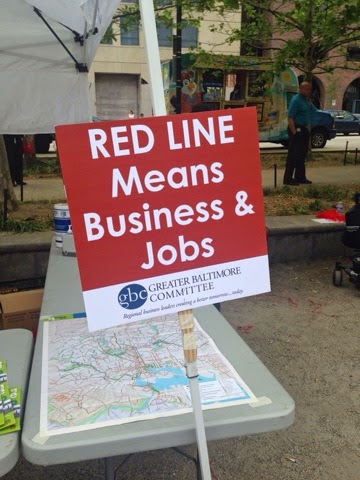 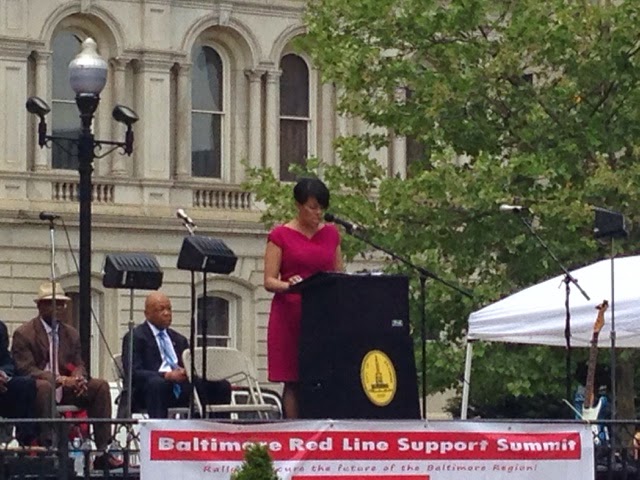 The rally was organized by Baltimore City DOT. There will be two additional rallies at Patterson Park on May 15 and at the West Baltimore MARC Station on May 20, each between 5pm and7pm..

Transportation for America Report "Weighing Maryland's Economic Future"
Baltimore SUN Editorial: Why we need the Red Line
Posted by Klaus Philipsen at 10:19 AM